Celina Poppe has been a member of Judge Memorial’s Campus Ministry since 2017. She oversees school liturgies, class retreats, and Kairos retreats.

In high school, Ms. Poppe remembers attending a SEARCH Retreat and working on school retreats as being the most memorable moments. Who would have guessed that these experiences would serve as the foundation for her future career path? She finds inspiration in the service of others, in "people doing good". She involved herself with the Jesuit Volunteer Corps after college in an effort to be part of solutions to world issues.

While attending high school, she took a class taught by a remarkable and influential teacher titled "I Can". "It was all about lifting our image about ourselves." She continues to use a lot of what she learned from that class to encourage her students to believe and trust in themselves. When asked what she would be doing if not in her current job, Ms. Poppe said, "This job is exactly where I want to be!"  Her favorite part of teaching is, “Watching my students learn and grow” .

Ms. Poppe has lived an interesting, exciting, and a miraculous life. She fulfilled a childhood dream by working at Sea World. "I can walk around backwards and talk about marine mammals for hours!" Her husband proposed to her 40 feet underwater! She has competed in 11 marathons, including the Boston Marathon on April 15, 2013, where she finished minutes before the horrific bombing that claimed three lives and caused over 260 injuries.

Advice Ms. Poppe wishes to share with students is this: "When in doubt, choose love!" Ms. Poppe's role-model is Jesus who personified love. "I'm always trying to love like this guy!" 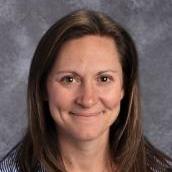