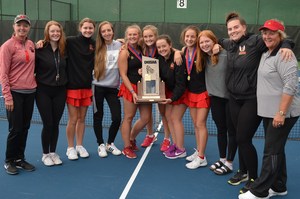 A tense and memorable weekend! One for the Judge Memorial history books! Judge Girls' Tennis takes the title!

A tense and memorable weekend! One for the Judge Memorial history books! The UHSAA 3A Girls Tennis Tournament began on Thursday, September 28. Judge Memorial came out with the lead by winning nine out of their ten matches that day and ended the day with nine points, one point ahead of rival school, Grantsville.

On Saturday, day two of the tournament, the weather forced the tournament to move indoors and the teams moved locations from Liberty Park to Salt Lake Swimming and Tennis Club. Judge, Waterford and Grantsville were all within a couple points of each other, thus each match and its points were vital! Judge had four (out of the five) positions in the semi-finals: singles players Katherine MacPhail and Emily Rougelot, doubles team Anna Drossos and Olivia Anderson, and doubles team Ellie McCoy and Veronica Start.  MacPhail and Rougelot lost to the eventual number one and number two Singles State Champions, but played some of their best tennis.  Drossos and Anderson defeated Grantsville in the semi-final match-- a team they had lost to twice during the season!  They went on to win the Final match against Richfield. That win gained the Judge team another four points.  McCoy and Start won their semi-final match against Morgan adding two more points to the team total and defeated Richfield in a very tense final match giving Judge Memorial the final points needed to clinch the title.

Judge finished with a total of 17 points beating Grantsville by ONE point! Thanks to wins from both Rowland Hall and Waterford, who helped by denying Grantsville and Waterford some points in the final rounds!  A nail-biting weekend all around, but Judge Memorial came out as the 2017 UHSAA 3A Girls Tennis Champions!  Well done ladies!