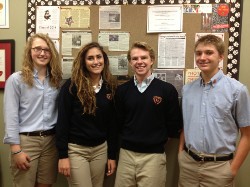 Ian is the son of Kathleen Brown and Mike Gorrell. Ian is a member of National Honor Society, Mock Trial, the State Math team and the swim team. He has completed volunteer service with St. Ambrose Parish, The King’s English bookstore, and J.E. Cosgriff Memorial Catholic School. In the summer prior to his senior year, Ian worked in the Rosenblatt Lab at the Huntsman Cancer Institute on a research project investigating how tumors metastasize. Following his internship, he was hired part-time to continue his research with the principal investigator, a role he is continuing through this school year. Ian is a graduate of J.E. Cosgriff Memorial Catholic School. Undecided on his college plans, Ian is leaning toward a career in biology or research biology.
Erin is the daughter of John and Ann Malooly. She has received Academic Awards for Excellence in German in ninth, tenth, and eleventh grades. She is a member of National Honor Society and girls’ volleyball, and was a school finalists in the annual Poetry Out Loud competition. Erin is a generous volunteer, having worked at the St. Catherine of Siena Newman Ceenter, McGillis School, Utah Food Bank, with the Brighton Ski Team, and with Bad Dog Arts, a local non-profit serving kids, teens, and adults in the creative arts. Erin is a graduate of The McGillis School. She is exploring the options of majoring in art, German, psychology, or one of the research sciences in college.
Christopher is the son of Robert and Jennifer Payne. A member of the National Honor Society, State Math Team, English Quest, and a literary magazine staffer, he has earned an Academic Excellence Award in Mathematics. A school finalists in Poetry Out Loud, Christopher was an Alliance for Young Artists and Writers spring 2014 Scholastic Art and Writing Silver Key Award recipient. Christopher has volunteered at the Madeleine Choir School Summer Camp and this past summer in Ecuador with Amigos de las Americas, a non-profit international youth leadership and community service program. Christopher is a graduate of the Madeleine Choir School. His college plans are undecided, but his is interested medical field.
Saylor is the daughter of Jeff and Stacey Soinski. She has earned a Academic Awards in both Mathematics and French, and has been named a National French Exam laureate winner. A member of National Honor Society and the State Math Team, she participated on the Debate Team and, as a junior, received the Most Valuable Participant in Debate. Saylor volunteers with Courage Reins, a local equestrian therapeutic therapy center. As a sophomore, Saylor traveled to the International Special Olympics in Korea were she helped set up and take down equipment, serve breakfast to athletes, and volunteered with unity sports, where the teams were mixed with people with and without intellectual disabilities. A graduate of St. Vincent de Paul Catholic School, Saylor is interested in majoring in environmental science.
All winners of Merit Scholarship awards will be chosen from the finalist group, based on their abilities, skills and accomplishments. Beginning in February and continuing to June, the National Merit Scholarship Corp. will notify about 8,000 finalists that they have been selected to receive a Merit Scholarship award. These awards are of three types: National Merit scholarships, which are awarded without consideration of family financial circumstances, college choice, or major and career plans; corporate-sponsored Merit Scholarship awards; and College-sponsored Merit Scholarship awards.
For more information about the National Merit Scholarship Corporation, please visit http://www.nationalmerit.org/.
Print